On July 31st, 1980 I was welcomed into this world via an emergency c-section. My mother's pregnancy was typical and doctors had no need for concern. They never even performed an ultrasound; this was pretty typical in the late 70s/early 80s era, unless some blood work or tests came back abnormal, neither of which happened in our case. The emergency c-section was performed due to me being breech, or attempting to come out backward. It was during this procedure that doctors realized something, indeed, was wrong. I was born with spina bifida mylomeningocele, the most severe form of the birth defect that leaves the spine open and exposes the spinal cord and nerves. While all cases of spina bifida differ in severity, my case created a lesion in my spine at the T-12/L-1 level, causing complete paralysis from about my waist down.

After my birth, there were so many questions: would I ever sit up? Would I ever stand or walk? What would my life be like? My family is from a small town outside of Madison, Wisconsin. When I say small, I'm talking fewer than 1000 people small, and actually considered a village. Before I came along we didn't know much about disability or of any resources that may be available for me. Luckily for me, I was born into a family with a strong line of females and I seemed to have inherited my mother's strong will and determination. It was actually my grandmother who pushed my mom to raise me the same way she would raise any "typical" child; rather than babying me and answering my every toddler demand (i.e. "I need a drink," "I can't dress myself! You do it!"), I was asked, or told, to do it myself.

Independence was instilled in me at this early age and I "ran" with it. While I never was able to walk without the assistance of braces, by the age of two I was pushing around in my very first wheelchair. If I couldn't get somewhere in my chair, I was crawling anywhere and everywhere I could, oftentimes ending my day with ripped up jeans and bloody knees. And I couldn't have cared less about the blood, I was having fun! I tried to keep up with my friends and cousins the best I could, even trying out t-ball with my able-bodied friends for a couple of seasons. It was apparent that I was an active child, but maybe this small town didn't have an active or athletic outlet for me.

Enter wheelchair basketball.  I found out about wheelchair basketball after attending an Easter Seals summer camp. During the school year, I had worked very hard with my school physical therapist to strengthen my upper body and we found out that I LOVED shooting hoops. At this camp, the local men's team came to do a demonstration and I ended up shooting around with them. Later that summer, a note came in the mail from the organization informing us that a junior program would be starting in Madison in the fall and they would like to have me join the team. My parents were thrilled... Me? Not so much. While I had a wicked independent streak and it was obvious I was strong and active, I had become a bit of a wallflower as I grew up. Around this age was when I started to realize I was different, so I was terribly shy. I was very nervous to try something new. My parents told me (once again) that I had to at least try it. I had never had so much fun as I did at that first wheelchair basketball practice. Fast forward to three Paralympic gold medals and the rest is history... 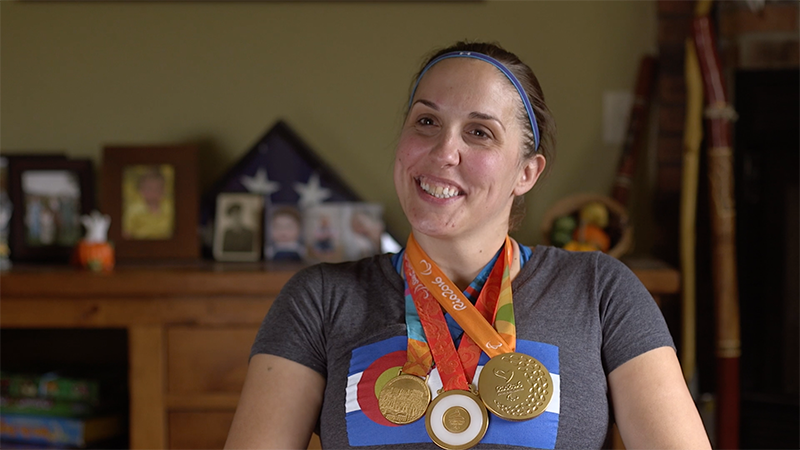 I consider myself very fortunate to have had a long and successful career in sport. Oftentimes I am asked what sport has done for me. Besides the obvious of physical fitness, healthy habits, a few national championships, multiple Paralympic teams and medals, sport has done so much for me that it is sometimes hard to describe the impact it has had on my life. However, there are three areas where sport has had the biggest impact in my life:

Confidence.  Without finding wheelchair basketball and other sports I have competed in, I am not sure I would have ever been the confident female that I am today. Finding like peers and playing on a more level playing field (even when I was playing against only boys) also boosted my confidence. This confidence turned into learning hard work and goal setting along with creating a desire and expectation of getting more from myself on and off the field of play.

Opportunity.  Sports have opened so many doors for me. Doors that my family may have perceived as permanently shut the day I was born with a disability. Once I started playing junior basketball, it opened the door to playing women's basketball in high school. This opportunity opened the door to Team USA tryouts and being recruited to play at the collegiate levels. Going to college opened the door to a successful track and road racing career. My degree open the door to volunteer and job opportunities that lead to my current position as head coach of women's wheelchair basketball at the University of Wisconsin-Whitewater.

Relationships.  Through sport I have met so many wonderful people. I am grateful for the friendships that I have been able to have with teammates, athletes and parents that have crossed my path. It has also afforded me the opportunity to be a role model for my child and an advocate for women with disabilities in sport. I am able to give back to a sport that has given me so much and I would never trade in any of my experiences along this journey.

From a questionable beginning to head coach at a successful university wheelchair basketball program, sport has taken me a long way. None of the success in my life would have been possible without finding the game of wheelchair basketball. It has helped me create, follow and fulfill my dreams.

Now my question is: what has sport done for YOU?

Christina is featured in the 8-minute documentary, Rolling Through the Hoops.