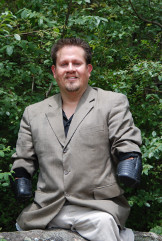 Bob Lujano joined the NCHPAD staff as an Information Specialist as part of the University of Alabama Birmingham/Lakeshore Foundation Research Collaborative in April 2012. Prior to that, he spent 14 years as a Recreation Specialist for Lakeshore Foundation, serving the mission of providing recreation opportunities for people with physical disabilities and chronic health conditions. Overall, Mr. Lujano has spent the past 17 years working in the field of recreation and sport for youth, adults, seniors and veterans with physical disabilities. After earning a Pre-law degree at the University of Texas at Arlington, Bob earned a Master of Science degree in Recreation Sports Management at the University of Tennessee. This led to a position at 1996 Paralympic Games as the Venue Director of the City Hall East Project, where he was responsible for accrediting, training and informing over 12,000 volunteers for the 1996 Paralympic Games in Atlanta, Georgia. He joined the Lakeshore Foundation staff in November of 1998 as a Recreation Specialist, where he was part of the development and implementation of recreation programs for kids and youth, but also has been part of the overall growth and awareness of Lakeshore Foundation as a pillar in the field of competitive sports and fitness. Bob is a member of the Lakeshore Demolition wheelchair rugby team, which has 5 USQRA National Championships (98-2003). This led Bob to being selected to the US Paralympic Rugby Team in which he won a bronze medal at the 2004 Paralympic Games in Athens, Greece. Bob was also one of the athletes featured in the Academy Award nominated movie Murderball.Finally, Bob is professional international public speaker, in which he speaks on topics such as faith, disability, diversity, rehabilitation, competitive sports, physical fitness and the benefits of a healthy active lifestyle. In April 2014, he was elected as the President of the United States Quad Rugby Association.