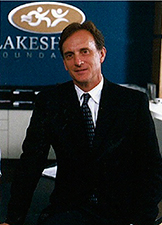 Mr. Underwood is President and Chief Executive Officer of Lakeshore Foundation; a Birmingham, Alabama based non-profit organization providing people with physical disability programs in fitness, recreation and sport. Underwood has been in this position since July, 1991. During his tenure, Lakeshore Foundation has won numerous awards for its services, including the inaugural “Amazing Partner Award” from the United States Olympic Committee, the first non-profit “Live the Dream Award” from the Birmingham Chamber of Commerce, and the “Friends of Children Award” from Children’s Hospital of Alabama. Since 2003, Lakeshore Foundation has served as an Official U.S. Olympic and Paralympic Training Site. In 2008 Underwood was named by the United States Olympic Committee as the “Chef de Mission” for the U.S. Paralympic Team competing in the 2008 Beijing Paralympic Games. In 2011 he was appointed by the USOC to its newly formed Paralympic Advisory Council. Prior to joining Lakeshore Foundation, Underwood served as Associate Director for Community Affairs at the Comprehensive Cancer Center of the University of Alabama at Birmingham (UAB). Before that, he served in Washington D.C. as a Senior Legislative Assistant for Congressman Ben Erdreich of the 6th District of Alabama. It was Mr. Underwood’s vision to establish a Research Collaborative and Endowed Chair at University of Alabama Birmingham.  This Collaborative houses the National Center on Health, Physical Activity and Disability (NCHPAD).  Additionally, Mr. Underwood serves at the Program Director of NCHPAD at Lakeshore Foundation and will engage the Lakeshore staff to create a unified approach in meeting the goals of the Center. Underwood has held several elected positions including the City of Homewood City Council, City Council President, and State Senator, State of Alabama. He also served for 10 years on the City of Homewood School Board, including two terms as President of the Board. Underwood is a member of the 2010-11 Class of Leadership Alabama and the 1998 Class of Leadership Birmingham. He is a Trustee for the Birmingham Business Alliance, and serves on the Boards of the Bryant-Jordan Scholarship Fund, Disabled Sports USA, and several other organizations. In 2003 he was nominee for “Citizen of the Year” for the City of Homewood. Mr. Underwood received his Masters of Public Administration degree from Auburn University Montgomery (1976) and his B.S. Degree from the School of Commerce and Business Administration, The University of Alabama (1974). He and his wife Melinda have two children, Anna and Maria.