How to Help your Child Get Enough

Hopefully by now you have heard of the obesity epidemic among our nation’s youth. “Let’s Move” and “Play 60” are just two of the huge campaigns out there to get kids moving more. However, many parents may often fail to self- identify with the concept of their child being overweight or obese.  Parental excuses can range from, “They’ll grow out of that baby fat” to “Well, my kid has a disability,” yet in truth studies show that both of those instances lead to a higher prevalence of obesity in adulthood and, in the case of kids with disabilities, a potential lack of independence, too.

According to the U.S. Department of Health and Human Services, kids age six to 17 should get 60 minutes of activity every day. Those 60 minutes may come in completely different forms for each and every kid, but they are still really important for all of them. While the list of comorbidities associated with a lack of physical activity and obesity is extensive, let us put those aside for the moment and take a look at the impact on independence. 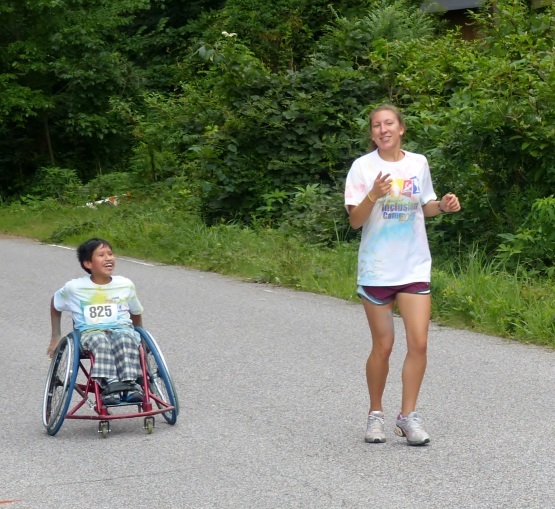 break. Children with disabilities who are also overweight or obese will likely struggle with transfers. The more weight they have to lift with their arms, the more difficult it will become. The more difficult transfers become, the less they will transfer out of their wheelchairs. And the less they transfer out of their chairs, the less active they will be on the whole. This lack of independence will then likely permeate into many other aspects of their lives, especially and increasingly as they get older. For example, if they cannot transfer independently they will not be able to shower or use the restroom independently or drive a car, to name a few.

And that is just looking at transfers. The more weight they carry, the harder a lot of other things will become, such as pushing their wheelchair, going over rough terrain, playing sports, and exercising in general.  Most kids just want to “fit in,” but the more overweight they are the less they are able to do, and thus the less they are able to fit in. So, health issues and comorbidities aside, being physical active and at a healthy body weight is still really important!

So what can we do to help stop the epidemic?

Sixty minutes may seem monstrous at first, but it is absolutely doable! Think how many hours your child spends at a desk or in front of a screen each day. It may be two, three, or even four times that amount. You can break up their activity into multiple bouts each day.  For example, you can walk with them to school in the morning to get 10 minutes in, while they are in PE they may get another 30 minutes, and then when they get out of school you can head to the park or the pool for another 20 minutes.

The goal is 60 minutes. How will your child get his or hers? Let us know on Twitter at @NCHPAD.