An Update on Zika

Every so often a viral outbreak occurs that puts the world on alert. Currently, Zika is the rampantly running viral infection with no vaccine or medicine in its path. Two strains of Zika are spreading around the world; one believed to be originating in Latin America and the other in Africa. The most devastating effect of the virus is the birth defects it can cause to an unborn child. The spread of Zika mostly occurs through an aggressive biting species of mosquito. Although traveling to and from other countries is the main concern of the U.S., the Florida Department of Health has identified a small area of a neighborhood in Miami where some of these mosquitoes are spreading the virus. However, the majority of Zika cases among U.S. citizens still occur through travel.

The National Institutes of Health (NIH) is funding a study that will observe exposure among Olympic athletes, coaches, and other Olympic Committee staff to the Zika virus at Summer Olympics and Paralympics in Rio, Brazil. The study "aims to improve understanding of how the virus persists in the body and to identify potential factors that influence the course of infection.”  Many athletes, coaches and staff agreed to participate in the Zika study. According to the World Health Organization, no cases of Zika have been found among anyone who attended the Olympics.

The NIH has initiated a clinical trial testing a vaccine intended to prevent the viral infection. The study recruited 80 healthy volunteers between the ages of 18-35. On August 29, 2016, it was reported that a team of researchers at Florida State University, Johns Hopkins University and NIH have found existing drug compounds that can both stop Zika from spreading in the body and from damaging fetal brain cells in newborns. Currently, one of the drugs is on the market as a treatment for tapeworm, which has been approved by the Food and Drug Administration to be of no danger to pregnant women. There are still ongoing investigations into understanding the Zika virus and protocols for stopping the spread. 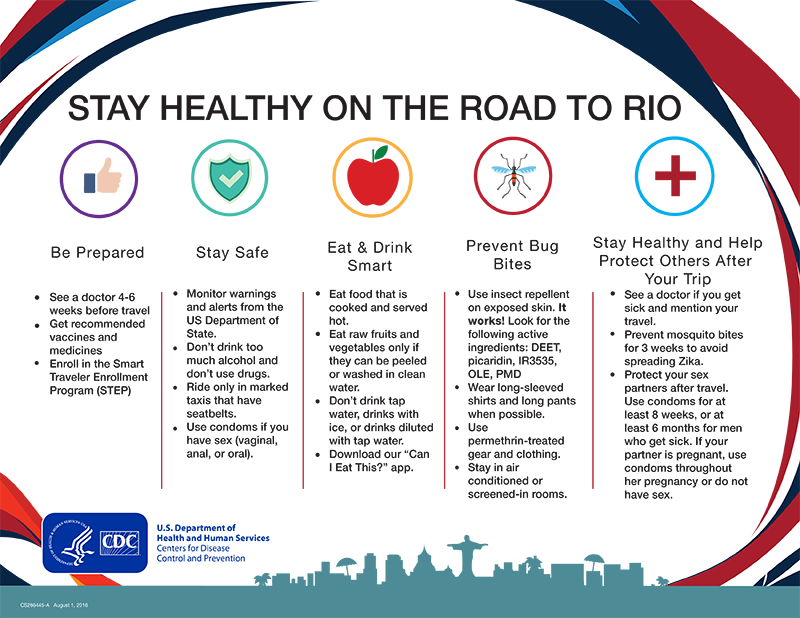 WHO: No Zika Cases Among Olympics Attendees. http://www.the-scientist.com/?articles.view/articleNo/46901/title/WHO--No-Zika-Cases-Among-Olympics-Attendees/. August 29, 2016.