Brendan is a retired Staff Sergeant (SSG) of the United States Army's Infantry.  He served two tours with 3rd Brigade (Rakkasans), 101st Airboorne  Division, with the first in Iraq and the second in Afghanistan.  On the second tour, a member of the Afghan Border Patrol put on a suicide vest and ran up behind a small group of soliders while around a small fire on their base.  The explosion took the lives of two of his brothers, Sgt Jonathon Richardson and Spc Jason Kropat, Brendan's left arm, most of his hearing, vision in his right eye, completely severed his left knee joint, shattered his right tib/ fib, and that is the short list.  He was resucitated twice before being induced into a coma and sent Stateside.

Brendan spent two years recovering at Walter Reed.  Many doctors told him that he would not be able to do so much of what he used to love to do.  He sort of gave up and began to live a very unhealthy life. After retiring and moving back to Massachusetts, his wife worried about the amount of weight he had gained and newfound unhealthy habbits.  She pushed him to try CrossFit, an activity he loved doing while in the Army.  Within 6 months he had lost 40lbs, got his CF-L1, a goal he had set before his Afghanistan tour, and began coaching at CrossFit Seekonk.

Since then Brendan has lost an additional 20lbs.  He has attended the CrossFit Kettlebel Course and CrossFit Competitors Course, as well as the L1 USAW sports performance coaching course.  He competed in The Agoge Challenge (3rd), WWG13 (17th) and WWG14( 1st). He also took on the CrossFit Games open last year. 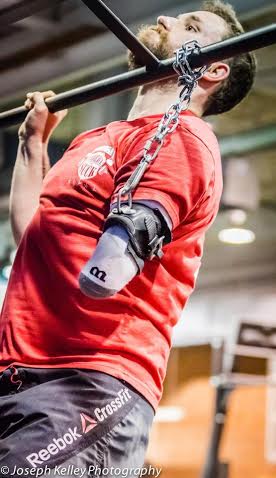