The game is played on a regulation-sized basketball court. Four players from each team are allowed on the court at a time with a combined team classification of 8.0. During the game, players pass a rugby ball back and forth while advancing into the opponent’s court; the goal being to cross over the goal line with the ball in one player’s possession. The offense aims to advance the ball while the defense tries to take it away and keep the opposing team from scoring. While a player tries to keep track of these rules they still need to remember that the sport is full contact and there is always going to be a player from another team gunning to hit you as hard as possible. Hits from behind and illegal use of the hands (grabbing, hitting, slapping another player) in the process of trying to get the ball are penalties, but all other hits with an individual’s chair are legal.

1.    A game consists of four, 8-minute periods. There is a 2-minute break between periods and a 5-minute halftime. Each team is awarded four, 30-second and two, 1-minute timeouts per game. If overtime is needed due to a tie game at the end of regulation play, then three minutes are added to the clock and each team is given an additional timeout. A game cannot end in a tie.
2.    A player has 12 seconds to advance the ball into the opponents’ half-court and 10 seconds to inbound the ball
3.    Teams have 40 seconds to score on each offensive possession.
4.    The player with the ball has unlimited pushes, but must pass or dribble the ball every 10 seconds or a turnover is awarded.
5.    Fouls are assessed and penalties can include awarding of a goal, a timed penalty or a turnover.
6.    To score a point, a player must cross the goal line with two of their four wheels while retaining   possession of the ball.
7.    Only three defensive players are allowed in the key, and if a fourth enters, a penalty can be assessed or a goal awarded

Wheelchair rugby is played indoors on a regulation basketball court 94 feet or 28 meters long by 50 feet or 15m wide. The sidelines, baselines and center lines, and center circle define the court.

A goal line at each end of the court measures eight meters. 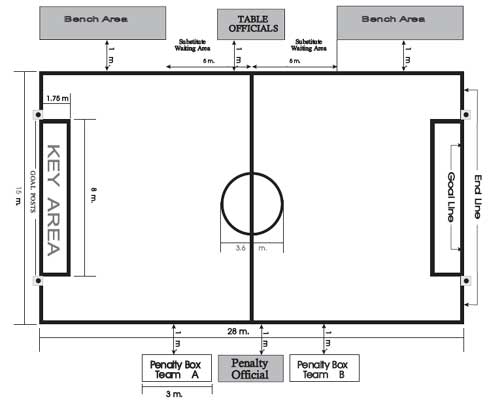 A key area extends from the goal line and is 1.75 meters or 5.74 feet deep.
Previous Page
Next Page
blog comments powered by Disqus