Wheelchair softball follows the same rules as the ASA, with a few modifications.  All teams must have 10 players, including at least one who is classified as a quad.  The sum total of their individual classification scores cannot exceed 22.  The defensive positions are the same as those in a traditional softball game, with the addition of one short outfield who plays between the standard infield and outfield positions.  If a team does not have a player designated as a quad, their score cannot exceed 19, they must play defense one player down, and they must take an automatic out each time through the batting order.  Additionally, players designated as quads may wear gloves on both hands, regardless of position (other players can only use one glove), may bunt (must indicate quad status to the umpire prior to their first at bat), and may modify their bat to improve their grip (as long as the umpire approves of the changes, for safety purposes).

During play, all players’ lower extremities should always remain on the foot platform of the wheelchair, never touching the ground.  Lower extremities of any player touching the ground or touching another chair for stopping purposes will result in a penalty.  The only exception to this rule is a base runner who is knocked out of his or her chair; the runner may proceed or return to a base as long as he or she does not use his or her legs as a means of getting to the base.

In the field, to tag a base a player (base runner or defenseman) must touch the base circle with at least one wheel (can be front caster or rear wheels; anti-tip casters do not count).  For defensive players, there are two “restraining lines” in the field (one infield, one outfield) which all fielders, except for the short outfielder, must keep at least one wheel behind until the ball leaves the pitcher’s hand.  Failure to do so results in an automatic walk to the batter. 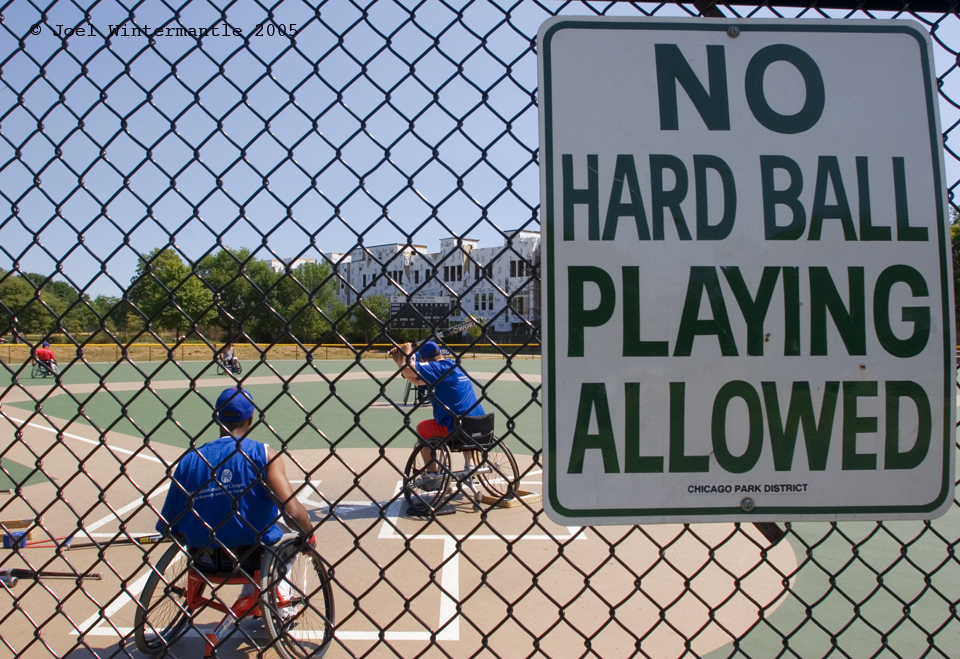